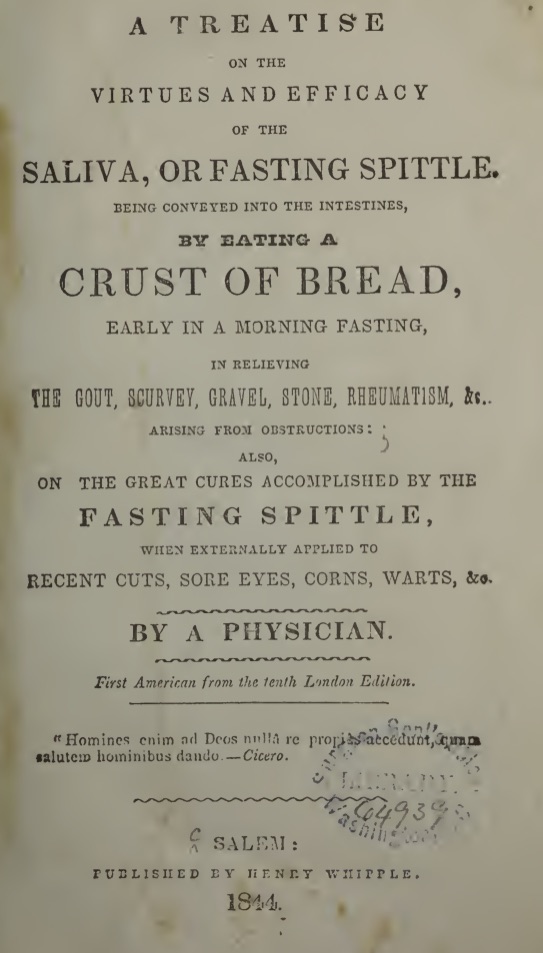 In the quote above you see advice given in the 16th century. Do you have some kind of wound, rash, or skin disease? Simply find a healthy person early in the morning before they have eaten and take some of their saliva and rub it on your skin. You should be cured before long.

Even in the 16th century, this was not new advice. Thomas Lupton recorded this nugget of wisdom in a book called “A Thousand Notable Things,” but well before that Pliny (1st century AD) and others were advising the same.  And this advice persisted, traveling to the New World, where in the 1800s a publisher in Salem, Massachusetts reissued a treatise on the subject written by a physician around the mid-1700s. In section III of the treatise, he talks specifically about how this “fasting spittle” can be used. There are echoes of the past in his contemporaneous observations. He talks of a number of cases where he has seen or heard of the healing effects:

Then we have the dawn of modern medicine. Spitting on a wound is strongly discouraged and such folk remedies are disregarded, even mocked. Yet, is there some truth to them? If it is a useless remedy why did it persist for so long?

When we turn to biology, we see an instinctive response in many mammals (humans, included) to lick their wounds. If this response were damaging, and only exposed the animal to harm, it would have surely been selected out by evolution. Yet, it remains.

In fact, an analysis of salvia does reveal the presence of many antimicrobial peptides and other agents that aid in healing. Wounds in the mouth tend to heal faster in other places. Modern scientists have even conducted studies to identify these compounds. Initially, mouse studies in the 1960s showed that epidermal growth factors were present in rodent saliva and could potentially speed up healing. Yet human and rodent saliva is quite different and the compounds identified in the studies that aided healing in mice were not found to be present in significant quantities in human saliva.

In 2008 and 2009 another piece of the puzzle was solved when a group of scientists published papers that (1) showed that human salvia can accelerated healing in tissue found outside the mouth and (2) isolated the molecule responsible for the increased healing times.

So, there is merit to the old folk remedy. Parents kiss the wounds of their children to “make it better.” Upon cutting your finger, your first instinct might be to place it in your mouth. Could this aid with healing time? Maybe. But beware, healing compounds are not the only thing found in the mouth. It is also filled with bacteria and viruses that might infect the wound. Perhaps the best thing to do is wait for the isolation of the compound by modern methods from the ancient idea of “fasting spittle.”

Robinson N (1844) A Treatise on the Virtues and Efficacy of a Crust of Bread in Relieving and Curing Disease. WH Perley: Salem, MA.

I work as a Lecturer in the Natural Sciences at Boston University. I have an undergraduate degree in Archaeology and a PhD in Biology. My research background is in Microbial Ecology. I am currently working on a project on bacterial community changes surrounding environmental factors in aquatic environments. I am also interested in the folklore and history of disease.

This is a text widget, which allows you to add text or HTML to your sidebar. You can use them to display text, links, images, HTML, or a combination of these. Edit them in the Widget section of the Customizer.